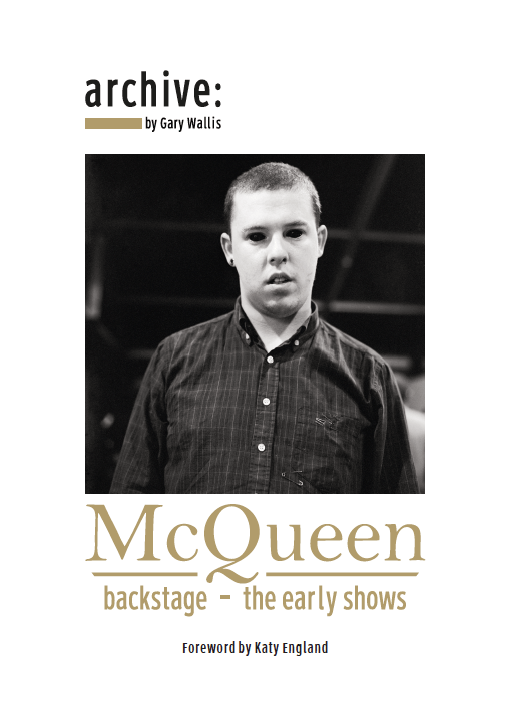 The first book from Big Smile Publishing, ‘Archive: McQueen: Backstage — The Early Shows’, was launched on 3rd March 2015 at The Proud Gallery, Chelsea, marking the fifth anniversary of McQueen’s untimely death. Big Smile is thrilled to be publishing this debut book from Gary Wallis, renowned British photographer and Big Smile founder, with a collection of select and never seen before images.

Photographer Gary Wallis first met Lee McQueen, later known as Alexander McQueen, while they were both studying at Central Saint Martins. Their long term collaboration began when Lee asked Gary to shoot his MA graduation collection ‘Jack the Ripper Stalks His Victims’. The images of this legendary show may now be lost forever.

The pair did not see each other again until shortly before McQueen’s ‘Banshee’ collection at Café de Paris. Lee requested he make a short ‘home movie’ including the show backstage plus take pictures. For McQueen’s next four shows ‘The Birds’, ‘Highland Rape’, ‘The Hunger’ and ‘Dante’, Wallis was given backstage access to take pictures. This mainly unseen library has been hidden away in filing cabinets for 20 years until now, published as the first in an ‘archive’ series by Big Smile Publishing. Wallis’ images provide a true insider’s view into a rare moment in time, as McQueen pushed the boundaries of convention and rose up to be the rebel king of British fashion.

This intimate collection, published as a beautiful litho printed hardback, is a must have for any discerning lover of McQueen and fashion alike.

0
Your bag is empty
Start shopping